Greetings.  It’s been a long while since we last updated the situation at Glenbog, but we have some good news.

Marie and Ray Wynan have been in lengthy discussions with the Forestry Corporation of NSW and have had some major impact on the logging work that has proceeded in the Glenbog State Forest.

Due to the Wynan’s influence new logging guidelines have been implemented, burrows are being GPS marked with many being left totally undisturbed if possible and others (that are in direct line of logging activity) being constantly monitored and protected.

Now, wouldn’t it be wonderful to see this happen in all logging forests everywhere! Please contact us if you are aware of burrow destruction in other forests and would like some information on how to act to protect wombats and other Australian native animals. 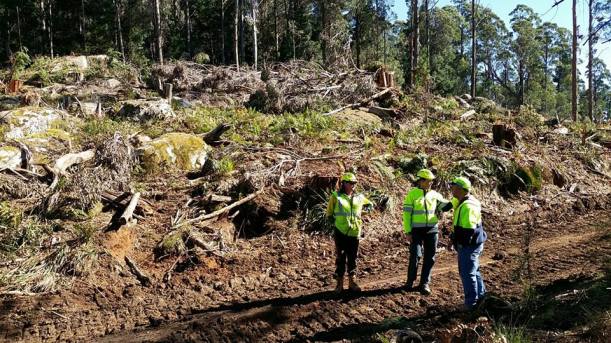 The Wynan’s with an employee from the Forestry Corporation of NSW in a portion of the Glenbog State Forest.

The Glenbog wombats have been a major feature of a campaign in Japan to persuade paper users not to accept paper made from Eden woodchips.

Following a visit from Japanese campaigners from Japan Tropical Forest Action Network (JATAN) in September last year, the Tokyo based group has undertaken a market campaign to inform Nippon Paper customers about the consequences of logging and woodchipping by its subsidiary, South East Fibre Exports, at Eden. They have received a reply from Nippon Paper which shows some profound misunderstandings about how SEFE operates and the impact that logging has on the wombats and other wildlife.

The wombats will not be taking this lying down! 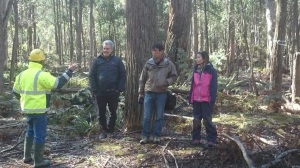 In the photo Keith Hughes, Akira Harada, Rina Miyagi and (of course) Ray Wynan’s back.

The WordPress.com stats helper monkeys prepared a 2014 annual report for this blog.

A San Francisco cable car holds 60 people. This blog was viewed about 1,800 times in 2014. If it were a cable car, it would take about 30 trips to carry that many people.

Some good news for a nice change!!

Forestry NSW have agreed to write a draft of operational guidelines for managing wombat burrows in State Forests. We won a battle but we still have to win the war!

Please continue to write to Forestry, Local and State Governments to ensure that ALL native animals are considered and protected in logging activity.

The draft guideline will consider:

1 Differentiation between burrows and ‘bolt-holes’

Below is part of an email from Marie and Ray Wynan to Forestry Corporation and proof that wombats have been killed resulting from forestry activity.

Click here to download a letter from Forestry Corporation, explaining how they believe they are protecting wombats during logging activity.

This is an excellent article, check it out….

So! Many people wrote and complained about Forestry’s logging at Glenbog yet The Minister for Primary Industries has indicated during question time that nothing will change.

12. What action will be taken against the contractor for damage to wombat burrow?

ANSWER
The Forestry Corporation of NSW is investigating the incident. The appropriate action will be determined once this investigation has concluded.

13. What steps have been taken to ensure this does not happen again?

14. Given the existence of voluntary measures and a claimed 2,000 prescriptions were not sufficient to protect these burrows, what changes is the Minister proposing to make to the regulations?

ANSWER
Forestry activities are regulated by the Integrated Forestry Operations Approvals (IFOAs), which contain appropriate measures for protecting wildlife across the landscape. The Forestry Corporation of NSW is committed to continuously improving its operations to minimise any environmental impact as a result of harvest
operations.

15. Will any action be action against the contractor for damage to wombat burrow?

ANSWER
The Forestry Corporation of NSW is investigating the incident. The appropriate action will be determined once the investigation has concluded.

17. Will the principle of avoiding logging in the vicinity of wombat burrows be applied in future logging operations?
(a) If so, will this be done on a case by case basis or will a requirement be incorporated into the IFOAs.
(b) If not, why not?

ANSWER
No.
a) N/A
) The harvest plan instruction in Glenbog State Forest was to avoid damage to wombat burrows as far as practicable, not to avoid harvesting in the vicinity. The Forestry Corporation of NSW’s ecologists make an assessment of the appropriate environmental prescriptions to apply within the framework of the IFOA and other related legislation when planning each compartment.

18. Does the Government support the principle that logging should not occur during winter months because of harm done to native wildlife which hibernate or rest in torpor during the winter?

ANSWER
Habitat for species that use periods of torpor over the cooler months is already routinely protected during timber harvesting in State forests, due to regulated exclusion zones around specified environmental features and requirements to retain
habitat and recruitment trees across the landscape. The existing prescriptions protect native wildlife and their habitat during timber harvesting, including during periods when they may be hibernating or resting in torpor.

19. Will the Government consider applying the principle of avoiding winter logging under the authority of the Forestry Corporation?

ANSWER
The protective measures for wildlife habitat applied in State forests were developed by expert panels and have taken into account the specific fauna groups and individual species’ habitat needs, including those that enter periods of torpor.
Application of these conditions means native wildlife and their habitat are protected during timber harvesting, including during periods when they may be hibernating or resting in torpor, and accordingly there is no need to avoid timber harvesting during
winter.

We would like to sincerely thank all who have followed and supported The Glenbog FB page and the Glenbog Blog, to all who have written letters and emails, made comments and signed petitions (please keep signing).

To have been able to read the support and knowing so many of you care, helps us to keep going, keep searching, keep digging and clearing entrances to all the blocked burrows.

It seems the Forestry Corporation packed up their machinery and left the area. Due to the pressure from an amazing amount of people, they left the remaining area and an additional 29 burrows were saved. The amount of wombats and other flora and fauna saved by exposure from the media and public outrage truly has made an incredible difference.

Let us not forget the wombats that died by being buried alive. Let us not make it acceptable to call it “collateral damage” just because they are “only” protected and not a “threatened” species (it just not good enough). Bare Nosed wombats are highly intelligent and the panick and fear they had to endure before they slowly died is horrendous.

There need to be changes of attitudes from the contractors, supervisors and planners  within the working  zones. The Forestry Corporation need to include clauses of protecting wombat burrows in their final approval plans for ALL areas and not be permitted to plan Dump Points, new roads etc above burrows. EPA has to follow up and “heavily fine/jail sentences” for breeches by the Forestry. Burrying animals alive is a crime against the Animal Cruelty Act, where is RSPCA? Where is National Parks? Why is the Forestry not held accountable?

Many thanks to all

From all the Bare Nosed Wombats that survived and remembering those who did not.

Of the 54 burrows, approximately 30 burrows were logged and the 4 destroyed and 5 of 7was blocked BEFORE EPA came for an inspection. (9 of 30 burrows had been totally ignored, 30%).

After EPA’s visit the same burrows was backfilled the second and then the third time. An additional 2 burrows were blocked. Our markers had been torn off and removed from some burrows.

“Forestry Corporation has already inspected and removed disturbances from the entrances of seven burrows,”

This is untrue. The Wynans removed debri and re-opened burrows .

The Glenbog Blog
Create a free website or blog at WordPress.com.